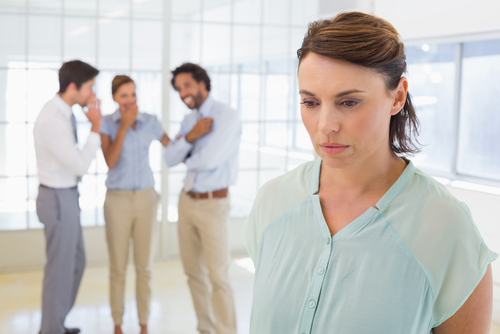 My bully is my subordinate.  He presents to others as “the nice guy,” and appears hapless and lost most of the time.  I’m just now realizing that some of this is calculated to avoid his work, and that I have over invested in attempting to coach him.  His previous supervisor used to stay late explaining basic writing skills (such as grammar, word usage, and consistent tense), while he earned overtime nodding his head, but failing to follow through on improving his skills.  He spends most of his day socializing.  When asked about the status his assignments, he states he “didn’t know” even when he’s agreed in writing to follow through, or initialed a memo outlining the assignment.  This “I didn’t know, I’ll get right on that now” is turning out to simply be a way to buy more time. Everything is fine as long as I don’t hold him accountable.  Even when this is done gently his response is very theatrical.  He was responding with over the top grief, guilt, and self-disappointment like a “sad puppy” cartoon character. I was reassuring him and giving him more time, and further instruction.  Now that I am keeping records and holding him accountable to his commitments, and is now becoming angry and accusatory as he resists completing his work.  He exhibits two very different sides: one is a poor victim who just needs coaching and understanding; and the other will fight hard to avoid doing basic tasks.  He smirks at me as he states: “Well, I didn’t have clear direction on that!”  Last week he barged into my office exclaiming “I don’t know why I treat you so badly, I’ve never treated anyone this badly in my life, and I know I should probably be disciplined.”  I explained to him that I knew why he did it, it’s because I let him, and it needs to stop. There is always an apology, but never a change, the work is not being done, and what work is submitted is of such poor quality I have to redo it myself.  This dynamic is further complicated by his marriage to one of our newly hired division leads who is in a position lateral to my supervisor.  I’ve been directed by my supervisor to start initiating discipline rather than continue coaching, but the employee seems to be flaunting his marital relationship with some view it now provides leverage. I really wanted to treat him with more dignity than what I thought his previous supervisor provided him, but now I know “the rest of the story.” I’ve read every book I can read on how to coach him and help him improve, but I’m on overload and running out of steam with no results.

This subordinate has learned how to keep the comfortable status quo, and he does not want to change.  The haplessness and “sad puppy” routine have worked for several years, and your new style now poses a threat to his comfortable existence.  When you started keeping records, and challenged his “I didn’t know” routine, you upped the game and became a threat.  This Shape Shifter has been playing this game for a long time, and has been able to get away with it.  Now that you see through his façade, and the old routine is not producing the results he wants, he is trying a new tactic.  This employee’s top goal is to successfully resist the change you represent.  The energy he puts into avoiding his work has always paid off.  Others have not invested the time, energy, and resources that you have in him.  What you have done is admirable, but this particular employee will not change.  Save your coaching energies for the multitude of employees who will respond positively to them.  In the meantime, the best investments you can make for this situation will be to document his commitments to the clear direction you are providing, and follow through on consequences for disruptive behavior.  Ignore his attempts to flaunt his social relationships.  Your responsibility is to see the work is being done, and right now, it clearly isn’t.

Jennifer Yuhas is a Senior Consultant/Trainer for The Growth Company, an Avitus Group Company.  www.thegrowthcompany.com / www.bullywhisperer.com™

How Do I Get a New Job Without a Good Reference?